Home » "From the Fields of Fire," A Volunteer Firefighter Shares His Story

"From the Fields of Fire," A Volunteer Firefighter Shares His Story 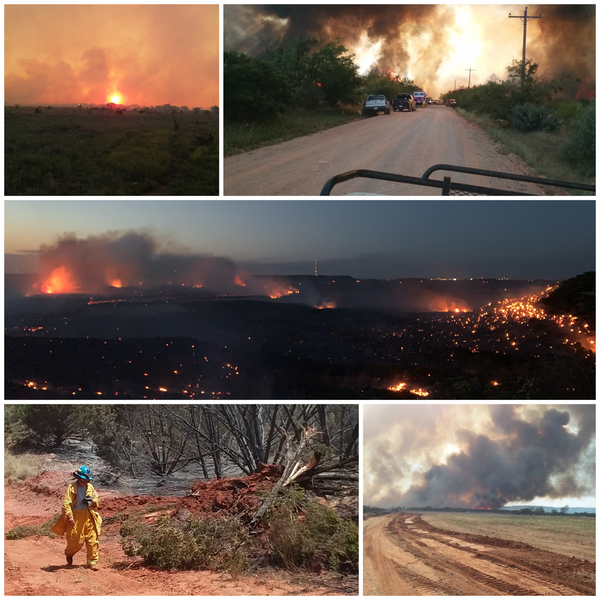 I am the President and Assistant Chief of the Mulberry Canyon Volunteer Fire Department. We are a rural department in western Taylor County like many VFD's across our region. Nationally, 70% of all firefighters are volunteers and 85% of all fire departments are all or mostly volunteer.

The men and women that volunteer for the fire service do so with the purest sense of community. They risk their safety, take time away from work and their families to protect their communities. They do this on a 24-hour X 365-day response period. They participate in training and do maintenance on their vehicles and equipment on their own time. Some employers credit time while many do not. They do not receive pay for their fire service. Our local departments work tirelessly together to combat and contain fires in our area and a day in the life of a volunteer firefighter can be unpredictable.

“After lunch, we were toned-out for a grass fire near the station. Then a second alarm for a wind turbine. Both were lightning strikes and you can guess how much rain we received: zero.

Donnie and 2 trucks went to the grass fire and Kitty and I went to the turbine. It was 2 stems from the one that started last week’s fire!

Now, the lucky part: The wind was low. The county had 2 maintainers close by and they were able to get around most of the grass fire and the brush was light. We received 2 trucks from Jim Ned and 2 from Buffalo Gap at the turbine which I re-directed to the grass fire and it was done in a few hours.

Now, the turbine: It burned and dropped debris. All the burning debris dropped straight down! Very little made it to grass and it must have been green or very sparse because it DIDN'T BURN! The upper blade burned and it is the first time one fell off. It was 120 feet long, around 7 or 8 tons and it made a thud when it hit. It smoked some then that smoke stopped!

The forest service sent two dozers from Brownwood and I had them cut a line around the thing at a safe distance.

We never got within 200 feet, we pumped no water and the fire was out! That was one for the record books!

Volunteer fire departments have been the victims of increased cost of everything from fuel and lubricants, the foam solution used to fight fire and all the hoses, nozzles and other equipment needed to fight fire. The clothing to outfit one firefighter can cost $2,000 or more. Vehicle insurance costs departments $5,000 to $15,000 annually.

Volunteer departments get very little in direct funding from the various government levels. While grants are available to reimburse departments for some expenses, they are not guaranteed and subject to cuts. Most funding for VFD's comes from donations through the generosity of the public.

To make a donation or to learn more about VFD grant opportunities, please click here.