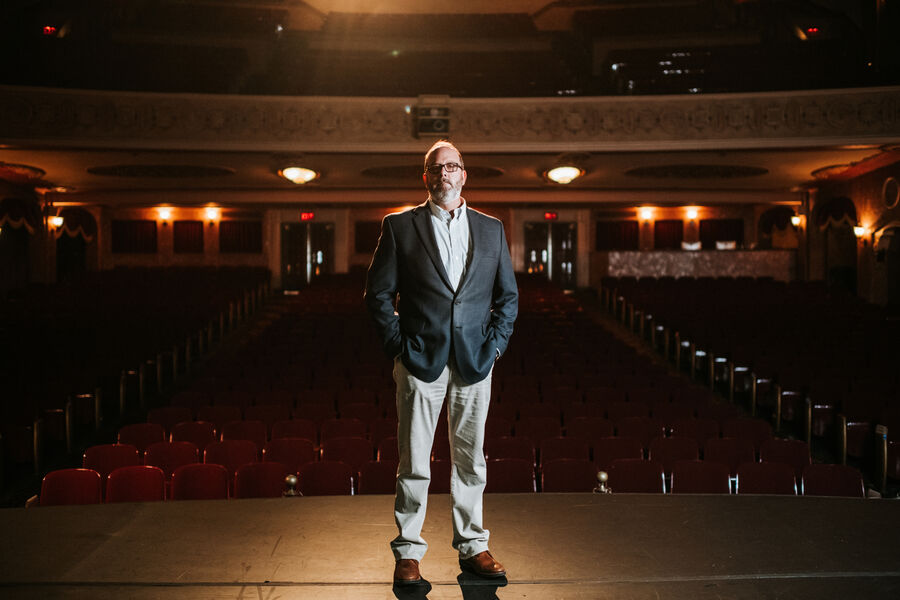 Since stepping out onto the stage beneath the stars in the early 90’s, he knew he had seen something special and recognized the gem it is for Abilene. “I love this place,” says Levesque. “The first time I stood on this stage and looked out at the audience and the sky above it, I knew this was really something.”

When 2020 began, the Paramount looked forward to celebrating 90 years as an organization, and by all accounts they were having their best financial year. “Everything just looked great, and then March happened.”

75 to 80% of the business is actual transactions – people renting the building, buying a ticket, buying a soda. All of it ceased. The bread and butter for the theater is concessions. When traffic stopped, so did the concession sales and the dollars for the Paramount. Levesque said it was scary and equally dramatic seeing it on paper.

But then something happened: Abilene Gives.

“I remember the night of Abilene Gives, I wanted to stay up to see how we did and I sat down at the edge of the bathtub and I kept hitting refresh on my phone and I looked down there and saw the final number and saw that it was closed for the night – and I’m a grown man and I shed a tear or two. Because it felt amazing to see that many people give a donation to this theater.”

In addition to the funding received from Abilene Gives, the Paramount has an endowment for the theater that they were able to draw on to pay general operational bills. They applied for emergency funding from the CFA and received money from that as well. “There is a profound joy when something is a success and there is a profound weight on your shoulders when things are not going well,” says Levesque. “COVID is happening and affecting this theater… and then you get a donor coming out of the blue sending you a check you didn’t know was coming or you apply for an emergency grant from the CFA. That check comes…and it just takes the weight off your shoulders.”

Levesque has been absolutely blown away by the generosity of people. It was decided in a staff meeting that the marquee should display a message of hope to the community who helped give hope to the staff of the Paramount. What started as a simple message was shared hundreds of times on social media, and the team continued the practice of displaying inspirational messages over the next few months. “We found our voice during a time when we couldn’t get up on the stage and talk or even let people in. We found a voice and we took it and our message is simple – we’re going to get through this, especially when we have donors like we do.