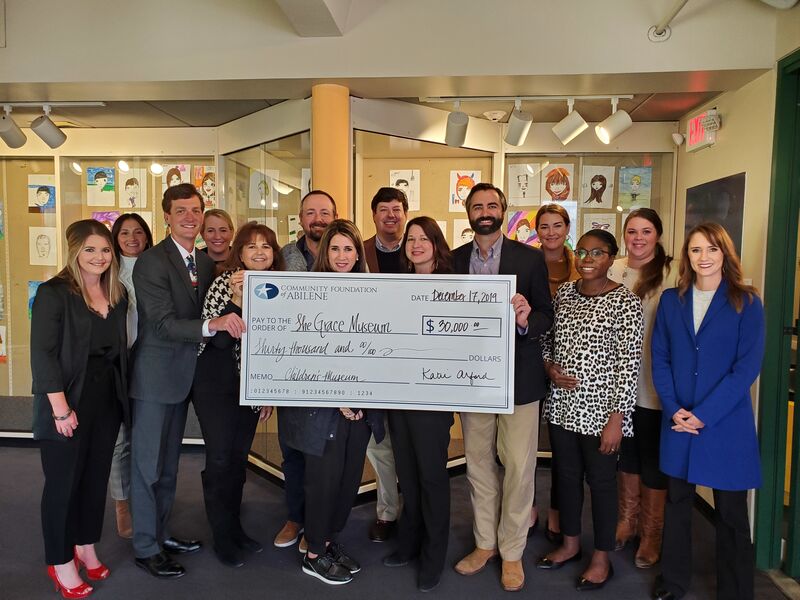 The Community Foundation of Abilene has awarded a $30,000 grant to The Grace Museum for its new children's museum, funding provided by proceeds from the Open Road Concert Series.

The concert series, founded in 2017, has benefited Future Fund of Abilene, which is a Community Foundation of Abilene endowment fund that makes grants to nonprofits serving children and youth.

When Future Fund members Sam Vinson and Taylor Sturgis helped found the concert series, they had two goals -- enhance downtown activity and use the proceeds to make a positive impact on our community.

"The idea behind starting a concert series like Open Road was to create a recurring event that would serve as a platform to bring 200+ individuals to downtown Abilene on a consistent basis," said Sam Vinson.

"Thanks to the buy-in from our concert patrons and sponsors, we have accomplished that goal. In addition, the concerts' success has given the Future Fund an opportunity to give back to the downtown community financially. This gift to the Children's Museum at The Grace will not only help a project that benefits local children, but it also helps to propel the overall goal of Open Road getting people downtown."

Laura Moore, Executive Director of The Grace, has supported the concert series from day one, allowing the concerts to be held on the rooftop of the iconic landmark.

"It has been a privilege to see the Open Road Concert Series spring from a dream to a wonderful reality," said Moore. "The group that gathers on the rooftop of the Grace, to enjoy great music, friendship and wonderful sunsets is a constant reminder of how great today and the days ahead are for our city."

The Children's Museum averages more than 600 visitors each week. The Grace is in the midst of a campaign to give the attraction new life, and this grant will help them reach that goal.

"What an incredible gift Future Fund is giving 'our kids' through their amazing gift to the project! We are thankful each and every day for our friendship and partnership," said Moore.